A Silver Camp Called Creede : A Century of Mining 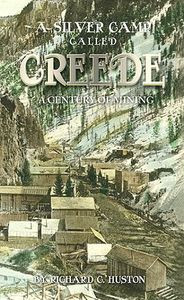 A Silver Camp Called Creede : A Century of Mining

Author Richard Huston gives readers a detailed explanation of the factors that were responsible in bringing about the establishment of Creede Camp, thought by many to be the last and the wildest of the Colorado boomtowns. Creede Camp became one of the giants of the industry and, during the hundred years or so it was in operation, was responsible for the excavation of approximately 182 miles of underground mine workings. Huston traces the history of these mines all the way back through geological processes that formed the San Juan Mountains, In doing so, he alo details the origins of the mineral deposits that later attracted thousands of miners, prospectors, and investors from all over the world.

Life at Creede had its ups and downs. The mines nearly closed down for good in 1918, when the bottom fell out of the market for precious metals. Things were also looking bleak during the Great Depression, when mining at Creede halted entirely. And yet, Creede Camp persevered through these hard times and again brought about the promise of wealth, long past the time when most experts had predicted its demise.

Although the town of Creede is no longer vested in the mining industry (becoming instead a center for cultural arts and a Mecca for tourists), the town's mining legacy remains, event to the point that an underground mining museum was established so that interested parties could have first-hand experience of what life in the Creede Camp mines was like.

A Silver Camp Called Creede by Richard Huston is essential reading for anyone wanting to learn about the history of the region, and that of Colorado in general. It is the chronicling of an era now committed only to memory, and an in-depth look at the kind of lives that were lived by the people that founded this little town while searching for their dreams.