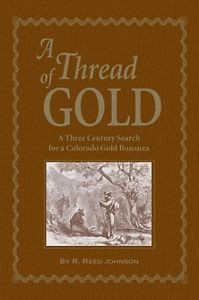 Spanning three centuries and three states, Reed Johnson's epic historical novel weaves the tale of three pairs of brothers and their search for a fabulously rich gold bonanza lying hidden within the rugged Lost Creek Canyon in the Tarryall Mountains of Colorado. Along the way the brothers find themselves caught up in several major events in the history of the West, such as Colonel Don juan Bautista de Anza's war against the Comanche Indians, Colorado's involvement in the Civil War, and the devastating effects of drought and the Great Depression as witnessed from a small farm outside Littleton, Colorado. In the hope of finding riches beyond their wildest dreams, the brothers brave blizzards, avalanches, cougars, grizzly bears, bootleggers, and robbers in search of the elusive mother lode. The dramatic impact these experiences have on the brother's lives as well as their families make A Thread of Gold a fascinating page-turner