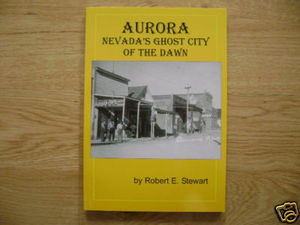 Discovery of Gold at Aurora opened the way to settlement of Nevada Territory. It proved there were precious minerals in locales beyond the rich Comstock Lode. Prospectors quickly fanned out across the Great Basin. Frontier mining camps sprang up in hundreds of places. The bustling economy soon elevated Nevada to statehood. Aurora was full of life during the Civil War years. It's streets teemed with hardy miners, millhands, merchants and barkeepers, stock hustlers and gunmen. Women coped with hardship and loneliness in the isolated location. In Retrospect, Aurora's most famous resident was Samuel Clemens. He quickly forsook both hard rock mining and laboring at a silver mill, and became a newspaper correspondent. A few months after leaving the mining camp, he emerged as the immortal writer and humorist Mark Twain.