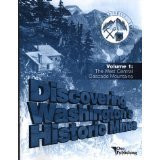 Gold! No other word evokes such mystique and desire. The quest for the yellow metal has driven exploration into new lands for centuries, creating frenzied rushes when any applicable amount has been discovered or even allegedly discovered.

Such was the Case in Washington's west central Cascade Mountains: In 1889 Joseph Pearsall discovered a broad ledge of Gold (it was actually Galena) on a mountainside and the rush began. The resulting influx of miners created the now legendary towns of Monte Cristo and Silverton, a railroad backed by John D. Rockefeller, and a brief but colorful chapter in the areas history.

The ruins of some Ghost Towns and traces of the railroad still exist today and are readily accessible to the casual tourist. But hidden in the mountains and forests are the mines themselves, now mostly abandoned. These were once a frenzy of activity, and some of the engineering and transportation feats employeed there were a marvel even by todays standards.

The First volume of Discovering Washington's Historic Mines documents the history, the goelogy, and the locations of all the known hardrock mines between Darrington and North Bend. Each mine is rated for hiking difficulty and distance.

If you are a rockhound, Prospector, or miner working in Washington State this is a must have series of books. The authors have put togehter one of the most concise histories and index of mines in state. Tons of information from hundreds of publications and then followed up by their own field work give you the most up to date information on mines in the state. Over 200 of them covered in Volume 1 alone. Lots of Pictures, histories, production, geology and more.