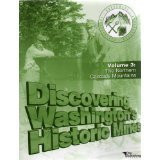 It was gold that first attracted the early pioneers to the Okanogan region of Washington State. Following discovery as placer deposits in the Similkameen River in the mid-1800s, the rush was on. The whole effort was complicated due to the indecision by the U. S. Congress as to where the local indian reservations were going to be situated, because mining was not allowed on reservation land. As the various areas were alternately opened and closed to mining, a few men were able to establish mining claims in the surrounding hills. Eventually when most of the area opened to mining, many of the claims and the resulting mines, were established on silver-bearing veins that outcropped throughout the region.

This book tells the tale of the rise and fall of the mines, ad the towns that supported them. Hundreds of thousands of dollars were poured into these enterprises, only to be lost when the silver market collapsed. Like other such ventures, moments of tragedy ad triumph punctuated the daily grind required to wrest the precious metals from the earth. Captured here are the stories of the miners and their families during this formative time in north central Washington State.

Lots of pictures both new and old of the mines, maps and more. Great Addition to the first 3 books in the series.