Jewels of the Early Earth: Minerals and Fossils of the Precambrian Geology 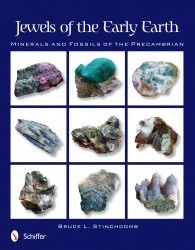 Jewels of the Early Earth: Minerals and Fossils of the Precambrian Geology

Jewels of the Earth

Minerals and Fossils of the Early Pre-Cambrian

Over 650 vivid color photos reveal the geo-collectible fossils and minerals associated with the first two billion years of earths history. The engaging text explores the geology of shield areas and their associated rocks and minerals. Also examined are pegmatites and their associated minerals, including attractive minerals and crystals like emerald and aquamarine. Early minerals and rocks associated with the formation of the earths atmosphere are also revealedthe geologic strata known as BIF (Banded Iron Formation). Some of the earths oldest fossils are included, displayed in outcrops harboring the earliest evidence of life. A variety of unusual minerals associated with early limestone-like rocks (now usually found as marble) are revealed, including highly prized rocks used for decorative carvings as well as gemstones. Greenstone belts, among the earliest rocks on the planet, are also examined and their interesting association with much of the earths gold deposits is explored. This book is a must for anyone passionate about geology and paleontology.