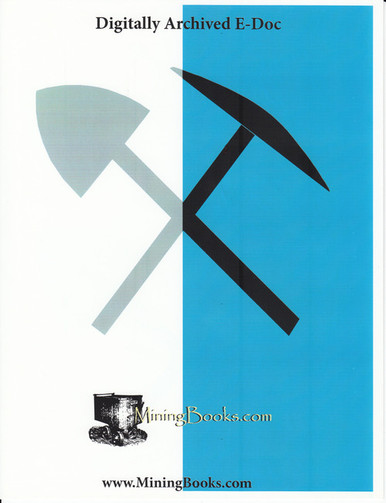 This is a very very rare publication. If you can find a copy it normally runs $400 to $500 per copy. This is probably one of the most complete publications on the mines of New Mexico written by Fayette Jones, who at the time visited all of the districts that are in this book. Lots of information and pictures of the district that you won't find anywhere else.

Section of the Earth's Crust in New Mexico and Mineral

Coronado and Other Adventurers and Their

Disappointments, Destruction of the Gran Quivira: Its

Gravels. Accumulations of Gold in the Bed of the Rio

Placers. Their Discovery and Primitive Methods of

Tierra. Geology of the District.

Copy of an Old Dodger of the Early Days. A Glimpse of

Exciting Times in Mining. Advent of the Santa. Fe

Mine and its Early History. Torpedu and Little Buck

and Iron Reef Districts. Discovery of Gold at Hillsboro and

Districts. The Celebrated Lake Valley Mine: Its Discovery,

on the Iron and Copper Deposits. Historical Data 102

Character of the Ores

Magdalena and Its Su perstitious. Discovery or the

Diservations on the Ore Deposits

Cooney Mine. Death of J. C. .Cooney and William Wilcox

by Victorio's Band of Indians. Camps of Mogollon and

Graham. Production, Character and Geology of the Region

Cimartoncito Districts, History of Discovery of Gold at

Aztec Mine. Placer Fields and the Big Dredge

Caliente Districts. Bromde Mine, Platinum in Tampa Mine.

and Pneumatic Concentrator Ores and Production 180

Copperaton and the Guadalupe Mountains

of New Mexican Mines. Geology and Mode of

Properties of Radium. Reflections on the

Ultimate State of Matter, Has the Alchemist's

Dream Been Realized: Notes on Some of the

New Mexico. Notes on the Early History or

Some of the Celebrated Springs. Medicinal

Exhaustive Compilation of These Classes of

Mexico, with the Authority of the Observation 327

Far as Now Known, Statistical Tables on the

Production of Mines and Labor Employed for the

Sketches of Governor Otero and Board of

* This document is Digitally Archived in PDF Format.  Upon purchase you will receive an email containing a link to download your item.