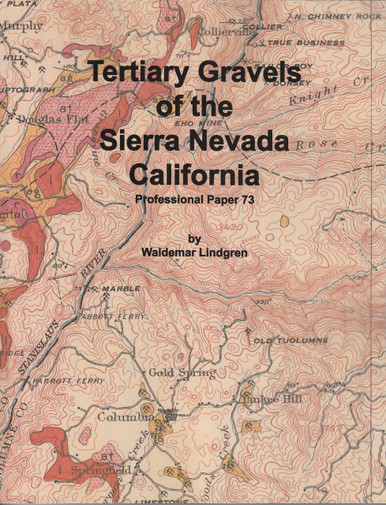 This Classic Now back in Print after over 100 years!

Tertiary Gravels of the Sierra Nevada also known as Professional Paper 73 by Waldemar Lindgren is probably one of the most important publications written on the Auriferous Gravel Channels in the Sierra Nevada of California.  These ancient river channels were the majority source of the massive placer gold deposits that supplied the Mother lode.  Gold from these channels started the Gold Rush of 1849 and is still supplying California's rivers and streams with much of their gold today.  As recently as 2014 a large nugget weighing in at 6.07 pounds or 75 ounces was discovered so the gold is still out there waiting to be found.  This publication is a great resource for research and historical information on the gold deposits and is now back in print by Sylvanite Publishing.