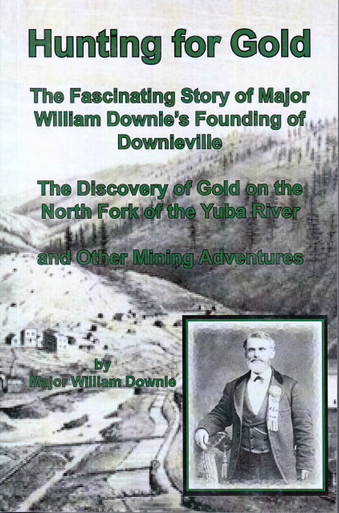 The Fascinating Story of Major William Downie's Founding and Downieville

Published in 1893 this fascinating story is a must read for anyone interested in the Gold Rush and in the areas in and around Downieville, California.  Major William Downie and a group of prospectors were the first group other than the Indians to venture as far back into the Sierra’s as they did, and they were rewarded richly for their efforts.  Gold was so rich in the area they literally sometimes just picked it up off the ground or out of the creeks.  Panning 50 or more ounces in a day was normal in the beginning.  His story is absolutely amazing as he tells of all their experiences from finding gold, to being snowed in and almost starving to death while having tons of gold but no one to buy food from, to the ending as the “Easy” gold eventually played out.  He also tells stories of Downieville in it’s early days, a town he is credited with founding, and a must see town even today if you have not been there.  Later he would leave California to chase gold in other rushes around the world.  Now back in Print by Sylvanite Publishing.